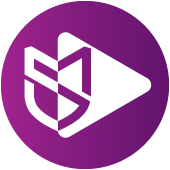 Seek to the previous/next subtitle. Subject to some restrictions and might not always work; see sub-seek command.

Adjust subtitle delay so that the next or previous subtitle is displayed now. This is especially useful to sync subtitles to audio.

Undo the last seek.  This works only if the playlist entry was not changed. Hitting it a second time will go back to the original position. See revert-seek command for details.

Mark the current position. This will then be used by Shift+BACKSPACE as revert position (once you seek back, the marker will be reset). You can use this to seek around in the file and then return to the exact position where you left off.

Go backward/forward in the playlist.

Go forward in the playlist.

Step forward. Pressing once will pause, every consecutive press will play one frame and then go into pause mode again.

Step backward. Pressing once will pause, every consecutive press will play one frame in reverse and then go into pause mode again.

Cycle through the available video tracks.

Cycle through the available audio tracks.

Decrease/increase pan-and-scan range. The e key does the same as W currently, but use is discouraged.

Cycle through the available subtitles.

Adjust subtitle delay by +/- 0.1 seconds. The x key does thesame as Z currently, but use is discouraged.

Switch between applying no style overrides to SSA/ASS subtitles and overriding them almost completely with the normal subtitle style. See--sub-ass-override for more info.

Move subtitles up/down. The t key does the same as R currently, but use is discouraged.

Seek backward or forward by 10 minutes. (This used to be mapped to PGUP/PGDWN without Shift.)

Combining Alt with the + or - keys changes video zoom.

Show the playlist and the current position in it (useful only if a UI window is used, broken on the terminal).

Show the list of audio and subtitle streams (useful only if a UI window is used, broken on the terminal).

Show/toggle an overlay displaying statistics about the currently playing file such as codec, framerate, number of dropped frames and so on. See STATS for more information.

(The following keys are valid only when using a video output that supports the corresponding adjustment.)

Resize video window to half its original size.

(The following keys are valid if you have a keyboard with multimedia keys.)

Did you find it helpful? Yes No

Contact MediaSeal Support if you have an issue or to answer any questions you may have. Please also review the Quick Start Guides and Product Manuals for more detailed information.